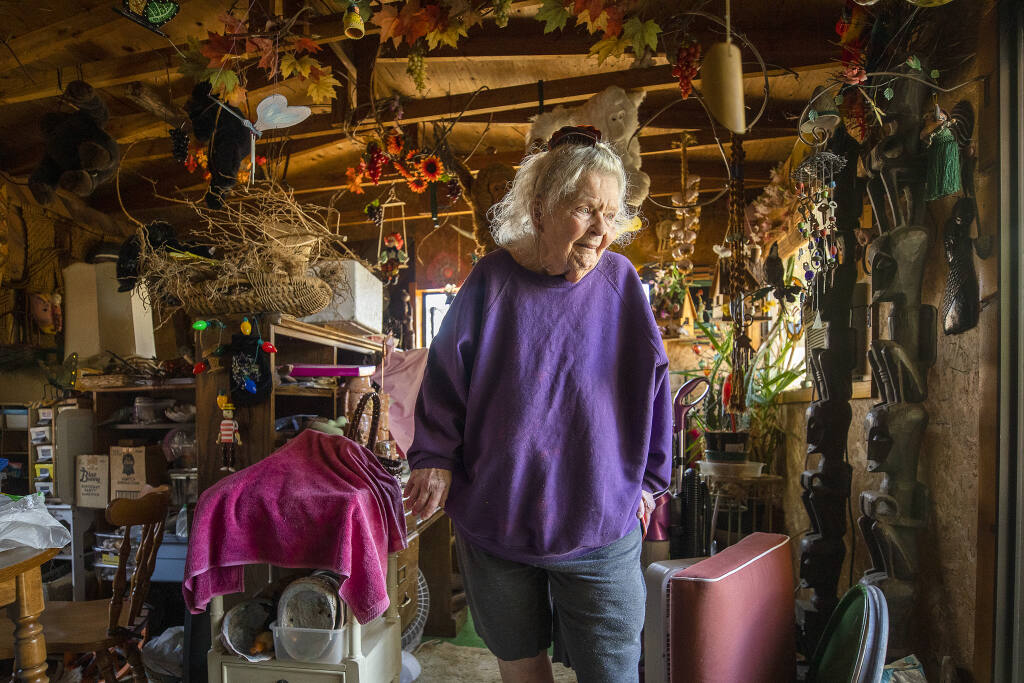 In 2018, Betty Racicot got a call from a distant cousin who had helped care for Racicot’s ailing mother in the final weeks of her life. The cousin needed a place to stay, and so did her adult son.

Racicot invited them into the cozy Santa Rosa house she had owned for 20 years. The visitors arrived in a rented car and with no money, and over the course of the next 18 months or so, they turned Racicot’s life into a living hell.

They took over her property and, after gaining access to her financial accounts, filled the space with things they had bought with her money. The son, prone to angry outbursts and conspiracy theories, berated Racicot and unsuccessfully tried to have her declared mentally unsound.

Racicot and her small dog, Honey, have the house to themselves again these days. But she is nowhere close to resolving the financial and emotional wreckage of those months.

“I couldn’t believe somebody would treat another person that way when I was only trying to help him,” Racicot, 82, said recently.

But Donata Mikulik isn’t shocked by the story. As Sonoma County’s elder justice coordinator, she has a bird’s-eye view of the devastation so frequently visited upon accepting, generous older Americans.

Wednesday is World Elder Abuse Awareness Day, and Mikulik and other advocates of older adults want people to know there are resources to help the aged avoid abusive predicaments, and to bring relief when it happens. But even those most involved in the safety net acknowledge its gaps.

“Solutions can be really challenging,” Mikulik said. “I’m not saying there’s nothing you can do, so just forget about it. It’s more like, ‘This is a challenge, what can we do about it?’”

It may be more of a problem here than most places. Residents over the age of 65 make up about 10.7% of the population statewide; in Sonoma County, it’s more like 20.4%. And as Mikulik noted, “Folks here often have property or other assets that can be a place for people to steal from, or for grandkids to take advantage.”

Sonoma County recorded 6,479 reports of elder abuse in 2021, Mikulik said. Only a few hundred resulted in police reports, and the district attorney’s office became involved in far fewer than that. Of course, those are only the documented cases.

There are resources, though. The county’s Adult and Aging Division, part of Health and Human Services, is a gateway for elders seeking information and assistance. The division’s full scope includes Adult Protective Services, the primary intervention team in cases of neglect and abuse; the Area Agency on Aging, which offers things like Meals on Wheels; and specialized services for veterans and those needing in-home supportive care.

It sounds like a formidable shield for vulnerable older people, but Betty Racicot ultimately felt abandoned.

“I tried to get the police to help me, the sheriff, the mayor. Nobody would tell me anything,” she said.

Unfortunately, much of the burden can fall on older residents themselves, and some of them don’t have the resources or know-how to navigate this complex system.

“The persistence it can take to get justice, that’s a difficult process,” Mikulik said. “It’s exhausting. And re-victimizing.”

The majority of calls that come to the Adult and Aging Division, about 55%, are cases of self-abuse, according to director Paul Dunaway. But among the 45% that involve harm or neglect by others, the largest category — 15% of all calls to the division — show a pattern similar to Racicot’s.

“When somebody allows somebody else to come into their home, into their life and the person finds a way to take advantage of them,” is how Dunaway described it.

A delightful woman with an agile sense of humor, she is a prolific collector of dolls and a busy jewelry maker. Racicot’s guests offered to help her sell some of the collection. That’s when Racicot gave the mother-son team her bank and credit card account numbers, and later her powers of attorney.

It was one of the worst mistakes of her life, she acknowledges now. The son proceeded to buy tool after tool, gadget after gadget, with Racicot’s money. She has eBay receipts for everything from scuba gear to paintball equipment. He traveled and ate on her dime.

The Press Democrat is not naming the perpetrator, out of concern for Racicot’s safety.

Things got so bad, Racicot and Honey wound up retreating to her small camper parked in the driveway. In 2019, she spent a lonely Christmas Day hunkered down in the RV in a San Diego parking lot.

Meanwhile, she said, he littered her backyard and driveway with detritus, used one bedroom to dry his harvested cannabis, smoked pot in her bed and crammed the garage with dozens of tools she unknowingly bought him.

“It got to the point where he said, ‘I don’t want you down here. If you want anything, I’ll get it for you,’” Racicot recounted while standing in the garage, where her former hot tub was invisible under mounds of personal items. “It hurts to see my garage like this.”

Between Nov. 6, 2020, and the man’s arrest Dec. 4, 2020, the Santa Rosa Police Department made 20 visits to Racicot’s house, according to call logs provided by the city. These included six welfare checks, five disturbance calls and two stakeouts. Dec. 4 was a stolen vehicle report. The squatter had taken Racicot’s Dodge Durango.

Santa Rosa police caught up to him that night a few blocks away on Sebastopol Road. The man barricaded himself in the stolen Dodge and threatened to shoot officers. After two hours of unsuccessful negotiations, the police finally shot tear gas through the rear of the car and fired a rubber bullet to extract him.

On Oct. 20, 2021, Racicot’s abuser was sentenced to six months in jail — on three charges of obstructing or resisting an officer. The vehicle theft and elder abuse or cruelty charges were dismissed or discharged.

He was released Jan. 8. A police officer left a handwritten note at Racicot’s house to warn her.

The aftermath has drained much of what was left of Racicot’s accounts. The restraining order had cost a few thousand dollars. The impound bill for her stolen vehicle was $1,400. A charitable organization stepped up to cover it, but the police also damaged the truck when they extracted Racicot’s abuser, and she couldn’t afford the repairs.

Racicot filed a claim for compensation related to damage to the SUV, but it was rejected. “Based on our investigation we have determined that the City of Santa Rosa and its Police Department cannot be held responsible for the alleged damages to your vehicle,” the city’s third-party claims administrator wrote to her June 30, 2021.

“I just got tired of calling people,” Racicot said. “My brain was bogging down.”

As a result of her abuser, Racicot said, she has about $4,000 left in the bank. Her lender has threatened to repossess her house, and the county has sent at least five letters demanding she pay overdue property taxes.

“I always had good credit. Until now,” Racicot said. “I haven’t paid taxes in two years.”

And while she hasn’t heard a peep from her tormentor in months, he still haunts her. The house and backyard remain full of his stuff, and Racicot hasn’t been able to get guidance on what she is legally — and safely — allowed to do with it. She last heard the man was living in Rohnert Park, and she’s on edge wondering if he will return to stake another claim to the property.

“I’m scared to death,” Racicot said. “I don’t sleep at night. I couldn’t sleep last night because my knees were jumping.”

Stories like Racicot’s are why the rest of us should be vigilant on behalf of the vulnerable, Mikulik said. Check in with your older neighbor. If you see an older lady behind you in the grocery line buying 10 Apple gift cards and you wonder if she has fallen victim to a scammer, ask if everything’s all right.

“We have a habit as Americans to respect someone’s privacy,” Mikulik said. “You know, ‘It’s none of my business.’ When it comes to older people, we have to flip that. Privacy isn’t a reason we shouldn’t be connected to other people.”

The isolation felt by many older adults has only gotten worse during the COVID pandemic, Dunaway said, as families have gathered less frequently and some older people have worried about the health effects of a trip to the store.

“Some of the side effects of being isolated involve mental health and depression,” Dunaway said. “Issues of connectedness are problematic.”

It’s a risky world for a trusting older person. Racicot knows her generosity opened the door to a nightmare. It’s her nature, she said, and she has no plans to change at 82.

“I give out of my heart. And things happen,” Racicot said. “But it’s not gonna stop me.”

This article was sourced from The Press Democrat